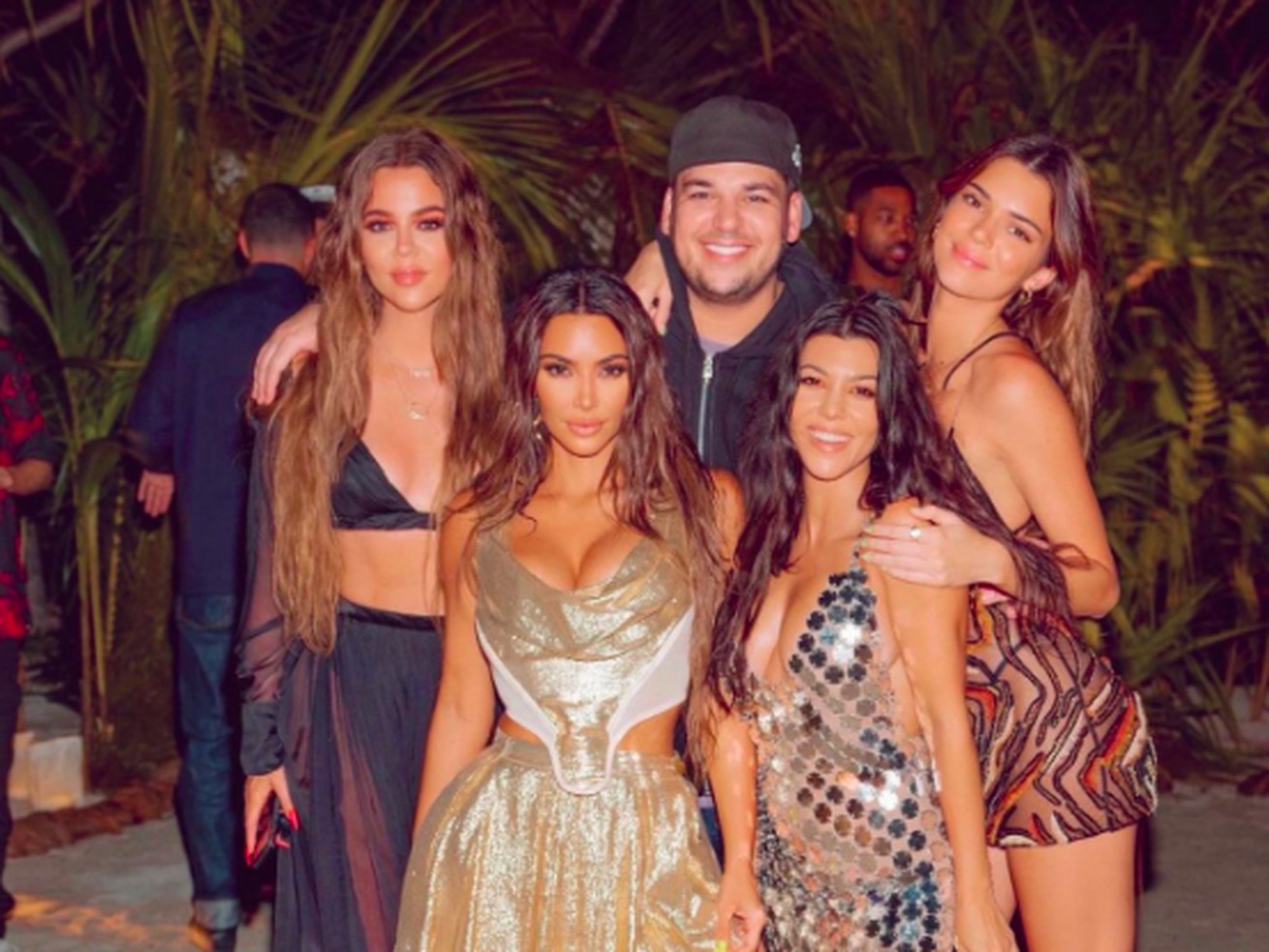 It wasn’t that she went to a private island. It was what she said about it.

It’s one thing when a paparazzi happens to be in the right place at the right time, sneaking a photo of a celebrity in a compromising position like being caught cheating on a partner or committing the mortal sin of having a normal-looking body. But it is almost always more interesting when a celebrity — completely, ignorantly, and willingly — tells on themself.

This is what happened on October 27, when Kim Kardashian announced that she, in the midst of a pandemic that has killed more than 200,000 Americans, flew dozens of friends to a private island to celebrate her birthday.

“40 and feeling so humbled and blessed,” she wrote on Twitter, which is the first time anyone on a private island has described themselves as “humble.” “There is not a single day that I take for granted, especially during these times when we are all reminded of the things that truly matter.”

40 and feeling so humbled and blessed. There is not a single day that I take for granted, especially during these times when we are all reminded of the things that truly matter. pic.twitter.com/p98SN0RDZD

For Kim, the things that truly matter are simple: dancing with friends, whale watching, riding bikes, kayaking, and watching movies on the beach, which they did during their time on the Tahitian island.

The reaction was predictable: Responses to her original tweet accentuated its tone-deafness in the face of mass suffering. “Wow so fun my family still hasn’t met my six month old baby but I’m glad you’re rich!” tweeted McSweeney’s editor Lucy Huber. “You know what would have felt normal for me, Kim? Not having to say goodbye to my mother over FaceTime as she was dying of COVID. Not hearing her ashes be interred over the goddamned phone so I wouldn’t put my dad and sister at risk.

Rubbing in this our faces is cruel & clueless,” added Food & Wine senior editor Kat Kinsman. Rock legend Peter Frampton even jumped in, writing, “Are you that insensitive you don’t realise this is not what the majority of people during the worst covid spike yet want to hear? People are going to food banks not private islands.” Many others shared a gif of the iconic quote from Keeping Up with the Kardashians, when Kim cries over a lost diamond earring in the ocean and Kourtney quips, “Kim, there’s people that are dying.” (As these things often go, plenty of other commenters lambasted those griping for their “jealousy” and “hate.”)

Kim had tried to predict and mediate the response, and in what appeared to be an attempt at self-awareness, she wrote: “Before COVID, I don’t think any of us truly appreciated what a simple luxury it was to be able to travel and be together with family and friends in a safe environment,” she tweeted of her immense privilege. “After 2 weeks of multiple health screens and asking everyone to quarantine, I surprised my closest inner circle with a trip to a private island where we could pretend things were normal just for a brief moment in time.”

It was that last part that eventually evolved into its own meme, with Twitter users sharing photos of iconic pop cultural references of islands captioned with the same sentence — the Catalina Wine Mixer from Stepbrothers, Jurassic Park, and of course, the notoriously disastrous Fyre Festival.

After 2 weeks of multiple health screens and asking everyone to quarantine, I surprised my closest inner circle with a trip to a private island where we could pretend things were normal just for a brief moment in time. pic.twitter.com/aRW2FXIS2p

What these memes illustrated, however, is that it’s highly possible that perhaps what really annoyed people wasn’t the fact that a rich person went to a private island with their friends during the pandemic, but Kim’s insistence that it was done perfectly safely.

It’s what my colleague Jen Kirby off-handedly dubbed “performative quarantine,” and it’s everywhere — influencers pose on Instagram with wide smiles on tropical beaches captioned with tone-deaf missives to “wear a mask!”; our friends and family share photos of groups of people hanging out captioned with a disclosure about how everyone got tested beforehand in order to preempt any criticism that might come their way.

There is an easier solution to this problem: Just don’t post anything to begin with. Even before Kim Kardashian’s birthday, people have expressed frustration with those in their circle who not only are going on vacations but continue to share photos of them. The pandemic has created a stark divide between people who continue their normal social media habits and for those who think that any type of performance of normal life online is an affront to everyone else.

With social media accounts under more scrutiny than ever before, one could reasonably expect famous people to know better. There are certain parts of being a celebrity that will always be different — and, by “different,” I of course mean “much, much better” — than being a normal person. Two of those things are access to private islands and private jets and the ability to say something like “40 of my closest friends” without laughing.

The pandemic, though, was supposed to be an equalizer. There was an element of schadenfreude in its early days, as though influencers and celebrities would finally feel a taste of what being normal is like: No spontaneous getaways, no ritzy parties, no extravagant dinners at expensive restaurants. Vanity Fair asked, “Is This the End of Influencing As We Know It?” as the pandemic seemed to deepen class war anger.

But, within days of quasi-lockdowns appearing in the US, it became clear that famous people would not, actually, be living anything comparable to average quarantined life. Fashion blogger Arielle Charnas received so much backlash for escaping her New York City apartment to a rental house in the Hamptons while having tested positive for coronavirus that she turned off comments on her Instagram; TikTok superstars refused to stop hosting massive parties even after the city of Los Angeles cut off their power.

At this point, the most surprising aspect of Kim Kardashian’s birthday trip is why any of it is surprising at all. Of course celebrities are still going to do celebrity things, because they can. Despite the fact that California, where the Kardashians live, has advised against all forms of nonessential travel, this doesn’t actually mean anything. Flying, private or otherwise is not against the law.

Beyond the performative quarantining, too, Kim’s language in her tweet is telling. As Rebecca Alter noted in Vulture, “This display of exorbitant wealth and privilege during a time of record unemployment and disease is made all the more blatantly icky by Kim’s couching it all in the language of gratitude.” We tend to praise this sort of acknowledgement of our own good fortune, particularly among white people who have been taught that by simply reflecting on white privilege that they are doing the real work of dismantling white supremacy.

I’m reminded of a recent essay by the New Yorker’s Katy Waldman, who criticized this very tendency in popular fiction. “These self-conscious times have furnished us with a new fallacy. Call it the reflexivity trap. This is the implicit, and sometimes explicit, idea that professing awareness of a fault absolves you of that fault — that lip service equals resistance.” Performative allyship (think the black squares on Instagram, social justice slideshows, or “self-protective irony”) are what Waldman is referring to, the subject of many recent conversations around what “counts” as being a good person.

When Kim Kardashian acknowledges how wonderful and blessed her life is, for instance, what should that really mean? That she has the bare minimum amount of societal awareness to note that not everyone in the world can host an impromptu surprise private island getaway for their dozens of friends? Okay!

It’s not even that important what she meant — I assume it means she is very happy and feels very lucky, which genuinely must be nice! The plain facts are these: Kim Kardashian spent millions of dollars on a birthday party in a pandemic and announced it to the world, seemingly without awareness about how it might come across, and without even any caveat about a possible donation she made to an organization devoted to Covid-19 relief.

That, ultimately, is all we really need to know.

Help keep Vox free for all

Millions turn to Vox each month to understand what’s happening in the news, from the coronavirus crisis to a racial reckoning to what is, quite possibly, the most consequential presidential election of our lifetimes. Our mission has never been more vital than it is in this moment: to empower you through understanding. But our distinctive brand of explanatory journalism takes resources. Even when the economy and the news advertising market recovers, your support will be a critical part of sustaining our resource-intensive work. If you have already contributed, thank you. If you haven’t, please consider helping everyone make sense of an increasingly chaotic world: Contribute today from as little as $3.

Don’t miss out on new posts!